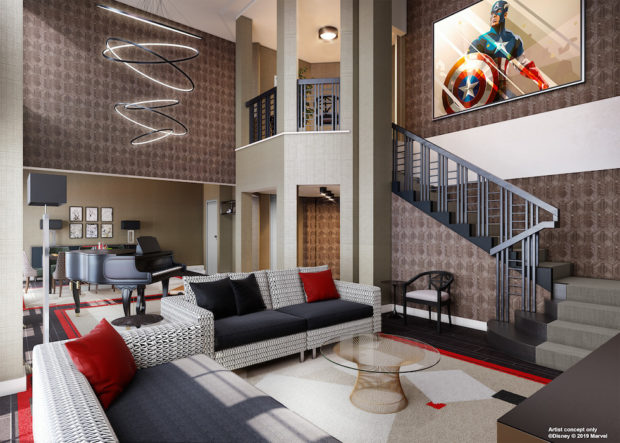 Earlier this year back in September more exciting details were shared for the brand new design for Disney’s Hotel New York- The Art of Marvel at Disneyland Paris that will be totally re-imagined as an homage towards Marvel’s mightiest heroes! Starting next year in the summer guests can stay at the Marvel themed hotel but, this week reservations opened up on Wednesday to book their stay. 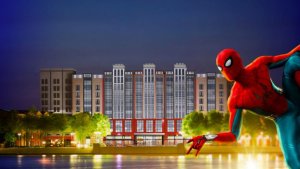 You can book your first visit as early as June 15th, 2020 for this hotel inspired by a New York art gallery, as a tribute towards the artists and birthplace of your favorite heroes that were created. Disney also mentioned that as a bonus, for every guest who books a stay by December 4th will take home an exclusive, limited-edition piece of Marvel artwork to celebrate the occasion. Created by legendary British artist Matt Ferguson, this Art Deco-style piece depicts the Super Heroes standing together in front of a dizzying New York skyscraper, also featuring Disney’s Hotel New York – The Art of Marvel and other famous Marvel monuments like the Avengers Tower.

In addition to this collector’s item, the limited-time offer includes a “half board” format with breakfast and either lunch or dinner included per person per night booked. The hotel will have two brand new restaurants for the Manhattan Restaurant and the Downtown Restaurant.

The Manhattan Restaurant will be an updated table seating service that, will be featuring a chandelier inspired by Asgard that is Thor’s home as a palace. Featuring flavors inspired by family-owned Italian trattoria that will serve fresh and local products. 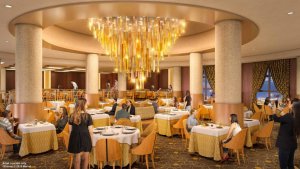 For the Downtown Restaurant will be American dishes with culinary flavors of Chinatown and Little Italy through cosmopolitan New York. A variety selections of Marvel-inspired specialties and also the walls will have 90 displayed sketched portraits featuring some of your favorite Marvel Super Heroes. 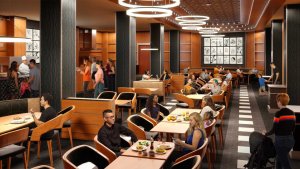 Guests will get unique benefits for staying at the hotel such as; free shuttle service, Extra Magic Time for guest access before both Disneyland Paris and Walt Disney Studios parks both open up and more experiences for the hotel.

Disney’s New York Hotel- The Art of Marvel will be a celebration of Marvel’s 80th anniversary and Disneyland Paris’s collaboration with Marvel Comics and Studios with more than 50 artists in help creating more than 300 pieces of art for the hotel including; comic book covers, illustrations from the Marvel Cinematic Universe, posters, original sketches, storyboards posters, and much more to be featured in the redesign of the hotel.

Opening date is still to-be-announced as the date gets closer for the hotel and we’ll provide you those updates when it comes.

To recap the full details of the re-imagined hotel by checking out the article post from Attractions Magazine about it by visiting the link here.

For more information and to book your reservations for Disney’s Hotel New York- The Art of Marvel by visiting the link here to learn more.