As it was announced at the D23 Expo 2019 this summer, with the collaboration of Walt Disney Imagineering and Walt Disney Animation Studios have partnered with the Canadian entertainment company for Cirque Du Soleil in creating a brand new show coming to Disney Springs at Walt Disney World Resort. 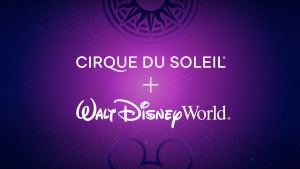 The new show is currently unnamed and the title is still a working progress, as it will combine Disney storytelling with Cirque’s signature style of the arts and acrobatics. The new show will also depict the art of Disney animation with new original acrobatic sequences that will include; choreography, music and characters and more.

Through out the course of the new show as it will cease to “amaze” guests while performances require “astounding athletic skill” including the musical score that will shake up the soul and the story “tugs deeply at heart” as mentioned on the Disney Parks Blog.

“This show is a love letter to the art of animation,” said Michel Laprise, writer and show director. “And it’s just a pure joy for us to explore the richness and the authenticity and the audacity of Disney animation.”

“It’s a show really based on love,” Laprise added.

The main character of Cirque Du Soleil for the show is named Julie, as she was raised by the animators and where Julie discovers a love of animation herself, and goes on to follow her dream.

The same theater will still be utilized at Disney Springs for this new show between Disney and Cirque du Soleil. (Concept Art Released during D23 Expo 2019)

The video down below includes interviews from Fabrice Becker, as creative director and Michael Jung as executive director of Walt Disney Imagineering.

Tickets are now on sale and went on sale earlier this year back in August as it will open up for previews on March 20th, 2020 and the premiere of the new show will officially debut on April 17th, 2020. To purchase advanced tickets by visiting Disneyworld’s official site by clicking the link here and further information.