As news just moments ago broke out in which Disney has move forward in submitting an application and a new proposed 12-story timeshare tower next towards the Disneyland Hotel after the plans were scrapped last year for a 700-room luxury hotel at the western end of Downtown Disney shopping district in Anaheim. 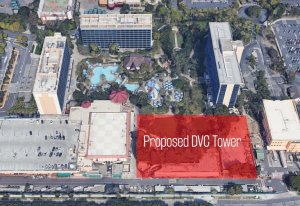 Aerial overview of where the new DVC timeshare hotel will be near towards the Disneyland Resort. Image: (© BlogMickey)

This brand new hotel tower will be up towards 350-rooms that will be located on a grassy area between South Walnut Street and Disneyland Hotel’s Frontierland tower. The construction would remove an existing laundry facility. Disney says the proposed DVC resort would create 550 construction jobs and 100 timeshare operations job if the project is approved. 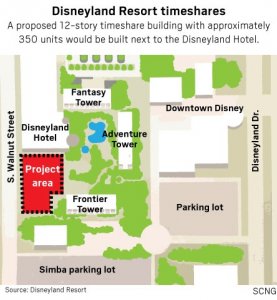 “We look forward to working closely with the Disneyland Resort, the City of Anaheim and engaging our neighbors on this project, which would also create new jobs and spending in the community, as well as generate additional revenue for the city,” Disney Vacation Club Senior Vice President Terri Schultz said in a statement.

The 280,000-square-foot vacation ownership project would increase Disneyland’s timeshare capacity nearly sixfold, that will be adding to the 71 Disney Vacation Club rooms at Disney’s Grand Californian Hotel & Spa. The new Disney Vacation Club rooms will increase the number of timeshare units in the overall Anaheim Resort area by more than 50 percent. Anaheim spokeswoman Lauren Gold said there are already about 600 timeshare rooms in the resort.

Disney will not be seeking a tax incentive from the city of Anaheim for the Disney Vacation Club project, officials said. The Disney Vacation Club rooms would generate a city bed tax similar to hotels that would be calculated using a slightly different formula — accounting for club members using points rather than dollars to book their rooms.

In terms of themeing and hotel name were not yet released as this story is still developing as we learn more from Disney of what’s to come next for the resort.