Star Wars: Galaxy’s Edge at Disney’s Hollywood Studios at Walt Disney World has been opened up for a couple months and even so for the Disneyland Resort in California as well.

However though, a change at one the expansion’s popular restaurants for Docking Bay 7 Food and Cargo at Walt Disney World’s Galaxy’s Edge for their menu was a bit of a shocking surprise as the menu was “watered down” towards basic English understanding of the menu instead of the Star Wars themed names for the cuisine items on the menu. As posted on the official Disney World site the names are a bit more understanding and clear than Star Wars cuisine items. 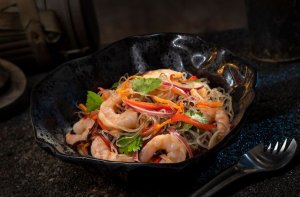 Originally some of the cuisine items for examples that were Star Wars themed related such as; Smoked Kaadu Ribs, Yobshrimp Noodle Salad, Felucian Garden Spread were completely changed. So instead of “Yobshrimp Noodle Salad” it’s now “Shrimp & Noodle Salad” or the “Felucian Garden Spread” is changed towards “Hummus Garden Spread”. Before the menu name change, it was labeled clearly in the description of the menu for those guests that don’t understand the Star Wars language barrier that aren’t big fans of the franchise.

This feels like one step backwards and the lost of immersion that the teams at Walt Disney Imagineering and Lucasfilm Ltd., have thought of for the culinary dishes for this huge at expansion at Disney Parks. Disney hasn’t commented on the menu names matter, when the news was first posted about it the other day.

The food menu names at Disneyland for their Galaxy’s Edge are still the same and have not changed yet. Stay tuned for more updates if Disney released an official statement on this menu name change matter.