Good Morning America aired a preview today at Disney’s Hollywood Studios at Walt Disney World for the highly anticipated and largest attraction that Disney has ever created for “Rise of the Resistance” that is opening both at Walt Disney World on December 5th, 2019 and Disneyland Resort on January 17th, 2020.

The huge hangar bay of the First Order Star Destroyer when you first walk in. Image (©Disney/©Lucasfilm Ltd.)

Fellow hosts of Good Morning America showed the massive hangar bay of a First Order Star Destroyer from today’s reveal. While the preview didn’t offer any new details since those are being under tight lipped about it but, it shows you how huge from the creatives teams at Walt Disney Imagineering and Lucasfilm Ltd., are creating this scale of an attraction.

Over 50 stationary audio animatronic Stormtrooper stand guard in looking you straight in the face before you board your mission in helping with the Resistance.

All practical audio animatronics of over 50 stormtroopers inside of the hangar bay. Image (©Disney/©Lucasfilm Ltd.)

Guests will be boarding a Intersystem Transport Ship in sneaking their way on towards the First Order Star Destroyer and will also come face to face with Kylo Ren and also other Resistance favorites like Rey, Chewbecca, Poe Dameron, Finn, and BB-8.

From there you’ll board a First Order Fleet Transport trackless vehicle and breaking your way through the chaotic firefight between the Resistance and First Order and making it all the way towards the transport ship safely back towards Batuu. 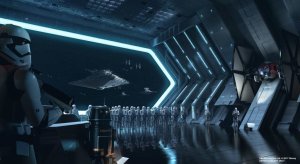 Two full sized AT-AT walkers and also a full sized First Order TIE Fighter will be part of the attraction inside of the hangar bay of the Star Destroyer.

This attraction will also be multi-level that will utilize sophisticated ride systems and giving guests the sensation that they are free falling from space back towards an emergency crash landing back to Batuu.

When Rise of the Resistance opens up it will follow the same operations as Smuggler’s Run and will not be offering any fast passes on opening day for both Walt Disney World and Disneyland for guest control of the attraction.

Check out the preview from today on Good Morning America and May the Force Be With You!