Star Wars: Galaxy’s Edge in both California and Florida have been opened up for a couple months now as this one of the largest and biggest immersive 14-acre expansion that Disney has invested $2 billion USD in working with Lucasfilm Ltd., in creating an original and different concept towards the Star Wars franchise.

At this week’s IAAPA Expo 2019 which is the themed entertainment’s biggest convention that is held annually at the Orange County Convention Center in Orlando, Florida brings together all the big and small companies in the industry in showcasing and revealing for what is next and current in theme/amusement parks, zoos, aquariums, and much more.

One of the bigger panels that was the IAAPA Legends Panel from this week, that had the project leads from Star Wars: Galaxy’s Edge as it was moderated by industry legend, Bob Rogers of BRC Arts. 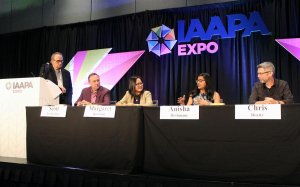 The project leads for Galaxy’s Edge that were on the panel:

In creating Galaxy’s Edge was no easy task as the only Star Wars attraction that has been around for years was Star Tours that Disney worked closely with George Lucas in help creating the attraction. Now focusing on for Galaxy’s Edge and Trowbridge said during the panel it was “intimidating” when he got approached for making this task from a dream towards a reality in “making people’s childhood dreams come true.”

Trowbridge elaborated more about the development process for Galaxy’s Edge provided down below:

“We very quickly decided that the right thing for us to do in the park was not to retell someone else’s story,” he said. “We wanted to create a new expansive Star Wars universe that had lots of stories to tell with all-new locations and all-new characters through all these different mediums.” according towards Attractions Management.

Interesting enough one of the big talking points during the panel was that, Margaret Kerrison said that “storytelling in Galaxy’s Edge is still developing and they have more plans after Rise of the Resistance opens up”. Rise of the Resistance is opening up in a few weeks on December 5th, 2019 at Disney’s Hollywood Studios at Walt Disney World Resort and January 17th, 2019 at the Disneyland Resort.

The first Rise of the Resistance TV spot is out. It has the DL opening date but no WDW?

Probably nothing or time to get the Disney tin foil hats back out. pic.twitter.com/p67rHQH5MT

Kerrison was also involved for the lightsaber building experience for Savi’s Workshop to incorporate of much detail from the Star Wars cinematic universe in creating an authentic product that die-hard fans would appreciate. 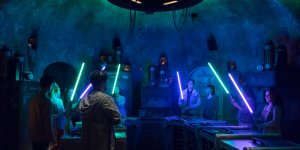 Guests can craft a hand built lightsaber at Savi’s Workshop just like in the Star Wars universe. Image: (© Disney)

She explained provided down below:

“Whether it be a movie, a novel, a game or a theme park, we’re building one single universe,” she explained. “All of these stories speak to one another. Carrying the torch of storytelling in Star Wars, we take that responsibility very seriously. We worked very closely with Lucasfilm on Galaxy’s Edge to make sure that is truly part of the Star Wars saga.”

To check out a sneak preview for Rise of the Resistance by checking out the link here to learn more about it.

Trowbridge elaborated more and confirmed that Star Wars: Galaxy’s Edge is “just getting started,” beyond Rise of the Resistance and the hotel as there are other things that haven’t been announced that are “coming down the pike”.

The symphonic suite for Galaxy’s Edge was conducted by legendary and famous film industry composer, John Williams to captivate the heart and soul of the expansion and has been nominated for a Grammy award nomination for next year under the “Best Instrumental Composition” category.

Anisha Deshmane is the creator and helped developed the datapad in the Disney Parks Play app to explore those experiences and interactivity with the expansion as she mentioned during the panel:

“It was something all of the creative teams were thinking about,” she said. “It touches on every single aspect of how the land functions. It’s its own attraction and it breaks that boundary of ‘wait in a queue, go on a ride, come out the other side, buy a souvenir’. It’s something that begins to be its own experience and can be something you spend multiple hours doing.” 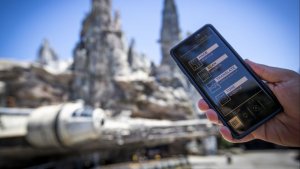 The datapad is one of the most unique experiences at Star Wars: Galaxy’s Edge. Image: (© Allen J. Schaben / Los Angeles Times)

Chris Beatty was the last member on the panel as he said “the land is the 3rd attraction” at Galaxy’s Edge after Smuggler’s Run and Rise of the Resistance. He explained more into detail from the following:

“From day one we said that the land itself is the third attraction. We have Smuggler’s Run, Rise of the Resistance and the Black Spire Outpost itself. That means merchandise, food and beverages are the connecting tissues between all these spaces – all of that is the experience.”

If you’ve been a fellow die-hard Star Wars fan and have been following the construction and creative process for the expansion since 2015 and which “originally” the expansion was going to have 3 attractions as C-Ticket attraction but, got cut due towards budgetary reasons. You can read a previous article from MiceChat about it by visiting the link here.

As for the upcoming Star Wars hotel interactive experience as Trowbridge also went into detail at the panel “as a couple days simulated space cruise through the Star Wars Galaxy [where] things don’t go according to plan” and said it’s unlikely anything else on the market. ‘ 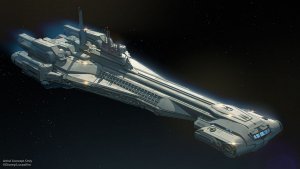 Details were announced at the D23 Expo 2019 for this 3-day interactive hotel experience as the name of the hotel is called, Star Wars: Galactic Starcruiser in which you can read the full details on the Disney Parks Blog by clicking the link here.

The panel closed out from the final remarks by Scott Trowbridge of himself saying, “we’re just getting started”!

The project leads for the expansion are at least being vocal and are paying attention towards the criticism and feedback for Galaxy’s Edge and are planning a content roadmap for their plans after Rise of the Resistance opens up. We will ever see the roaming droids shown in the promo material? A new restaurant with live entertainment in the earlier development phases of the expansion?

Time will tell for what is next and is coming towards Batuu on Black Spire Outpost but, as of right now whatever these teasing and interesting details from the passionate and dedicated teams that help make this expansion become a reality will soon be shared later on.

Leave your thoughts down below of what is going to be next for Star Wars: Galaxy’s Edge in the comments section below!

Character Dining to Return to Chef Mickey’s on December 16

Dr. Mark Ghaly is expected to give an update on industry guidelines for theme parks later today.