At the recent D23 2019 more details were given about the first ever “Mickey & Minnie’s Runaway Railway” attraction that is coming to both Walt Disney World and Disneyland. Enter the world of the animated and Emmy® Award-winning “Mickey Mouse” cartoon shorts on the Disney Channel, as Goofy will be the engineer on board a train vehicle in taking guests through the wacky and whimsical of the “Mickey Mouse” cartoon shorts. This will be an entirely original story in creating an immersive fully multidimensional experience. 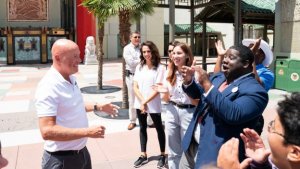 Disneyland’s Mickey & Minnie Runaway Railway will be opening up in 2022 while Disney’s Hollywood Studios at the Chinese Theatre at Walt Disney World is to be opening up some point Spring 2020. To recap the full announcement by visiting the link here for the details.

Cast members today at Disney’s Hollywood Studios were treated a special surprise for a sneak preview for the attraction and taken by surprised with Disney Parks, Experiences & Products Chairman Bob Chapek himself!

Check out the video down below from the surprise by Chairman Bob Chapek with the cast members down below: