SeaWorld Orlando’s water park for Aquatica is about to get something very unique and different for it’s first ever dueling water slide in the state of Florida. Making it’s debut for some point in 2020 called “Riptide Race” that the park announced this Friday afternoon. 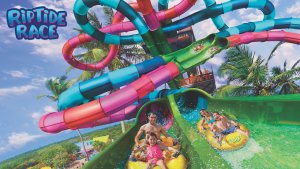 Riptide Race will be the first ever dueling water slide system coming to SeaWorld Orlando’s Aquatica in 2020. Image: (© Aquatica)

It will be located in the water park’s Banana Beach Cookout and Ray Rush which opened up last year. Riptide Race will be the first addition since KareKare Curl opened up last spring. Starting off from a 68-foot tower and traveling over 650 feet of slide, park officials says.

“Racers will navigate tight loops and accelerations through indoor and outdoor sections,” a news release says. Each raft will hold two people apiece. The attraction will have low walls so that non-rider can watch easily.

“Riptide Race will offer a ride experience you won’t be able to get anywhere else in Florida,” said David Heaton, vice president of the water park. “Aquatica will be the first water park in the state to have a thrilling, and more importantly, dueling water slide.”

The height requirement will be 42 inches tall in order to ride.

For more information about Aquatica Orlando by visiting their official site here to learn more.

SeaWorld to Close All Parks on March 16

Changes have been made all around EPCOT at Walt Disney World, let's take a look at what's new!