From the hit animation film by Illumination Entertainment’s Despicable Me in which of Agnes’s favorite stuffed animals she won at the pier with her sisters and Gru of the “Fluffy” unicorn stuffed animal or aka “It’s so Fluffy!!!”

The “Fluffy” unicorn Funko Pop Vinyl will be making it’s way towards Universal Studios Hollywood and Universal Orlando Resort as an exclusive. Their is one out right now from the 3rd Despicable Me film but, the only difference is that the label doesn’t have the Universal exclusive logo mentioned on the box. 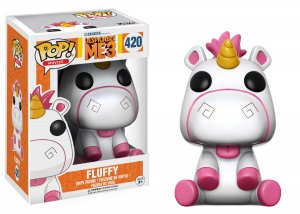 The release date for the Funko Pop vinyl wasn’t mentioned but, assuming it’s out right now to purchase. Pricing for it is $34.95 and no mention with an annual passholder discount or not. Also no mention as well if it will be released on the Universal Orlando shop and keep checking on and off it does come.

So if your like Agnes and wanting one just make sure you channel your inner “It’s so Fluffy oh my god I’m going to die!!”.