The next chapter for Universal Parks & Resorts was officially announced today! Universal and Comcast revealed their big plans for their Beijing park. This upcoming, brand new theme park, will bring innovative and immersive experiences to China on a scale that the country has never seen before. Universal is heavily invested, building two separate theme parks, on two separate continents–Universal Beijing Resort and also Universal Orlando’s Epic Universe. 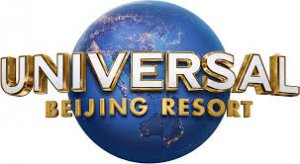 Universal Beijing Resort made their first announcement around this same time, back on October 13th, 2014. Looking at the competition, Disney opened up Shanghai Disneyland in June of 2016. 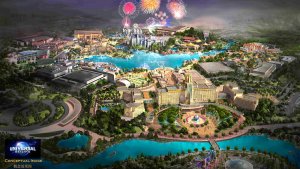 This resort coming to Beijing will be broken down in seven themed lands. Some of these lands are already present at Universal Parks & Resorts worldwide but this resort will capture new and innovative ways to present past projects. This resort will also include a Universal CityWalk and two resort hotels. Universal said their vision is “to become a theme park and resort destination that provides unique, extraordinary and thrilling experiences for visitors from China and from around the world.” 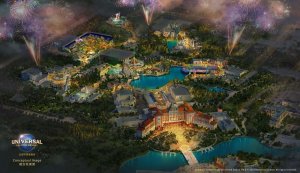 “We will immerse our guests in incredible experiences that bring their favorite stories and characters to life” said Mr. Tom Mehrmann, President and General Manager of Universal Beijing Resort. “Our theme park will showcase the best Universal rides, as well as all-new, unique experiences, specially created to reflect China’s rich cultural heritage. We are looking forward to sharing these exciting experiences with millions of visitors.”

As part of this historic announcement today, celebrities Li Bingbing and Liu Haoran (Turbo Liu) took fans through an animated sneak peek journey through the seven themed lands along with CityWalk and the two resort hotels. International film star, Li Bingbing, made an appearance in Transformers: Age of Extinction and was also joined by young actor, Liu Haoran, who voiced Hiccup in the Chinese translation of How to Train Your Dragon.

Video of the tour featured guest appearances by Chinese film director, Zhang Yimou and one of Hollywood’s most famous and influential film directors in the industry, Steven Spielberg. Both directors partnered to create a behind the scenes movie making experience for Universal Beijing Resort.

The destination for this resort is a representation of a historical partnership that has been in the making for more than a decade. Located in Beijing’s Tongzhou District, the total space for the theme park will occupy about 169 hectares (approx. 420 acres) of a 400-hectare (1,000-acre) site in the strategic central area of its Cultural Tourism Zone. This will promote international tourism growth for China as visitors across the world will travel to visit this upcoming theme park.

Here’s a complete breakdown for the seven themed lands for Universal Beijing Resort:

The Wizarding World Of Harry Potter:

With the opening of the Universal Beijing Resort, fans will be able to step inside the Wizarding World and Hogsmeade Village. This is an award-winning experience that will feature multiple groundbreaking attractions, shops, restaurants, entertainment and more. This land will be the similar in layout to the design found at Universal Orlando, Hollywood and Japan.

From Dreamworks Animation, Kung Fu Panda is a film series that follows the adventures of the brave panda, Po. The movie revoled around his quest to become a Kung Fu master. This land will be an indoor experience that is set in “Legendary China.” This land is set to be the world’s first theme park land solely centered around Kung Fu Panda.

Just like in the films, familiar locations will include; the Jade Palace, the Panda Village, and the Peach Tree of Heavenly Wisdom. With visually stunning Chinese architecture, festive decor, delicious food and captivating performances, this one-of-a-kind experience will transport Universal guests “through the movie screen”.

Villain mastermind Gru, and his crazy minion sidekicks will receive a Minion Land for the Universal Beijing Resort. Currently, Universal Studios Japan has a small Minion Land now open. This land opened in 2017 and the ride replaced Back To The Future: The Ride, back in 2016.

This land will be a family fun experience that is alive with characters and scenes from the films.

Based off Hasbro’s Transformers, this will be a dedicated themed land and a first in the world of Transformers. This is an expanded and customized story specifically tailored for the character Metrobase, who is a Titan robot (size of the city).

Chinese scientists are working with Metrobase, who selected this Energon rich site just outside the city of Beijing to serve as the N.E.S.T. Beijing headquarters- a top-secret, technologically-advanced zone where an alliance between humans and Autobots developed to protect the Earth. This land of the park is filled with Cybertronian architecture and advanced technology that will create an immersive experience that brings “guest agents” into the world of Transformers like never before.

From what was once started on film by director, Steven Spielberg, Jurassic Park has officially passed the torch to Jurassic World!

“Jurassic World Isla Nubar” is one of InGen’s islands of wonder and thrills. The Universal Beijing Resort will be tackling this legendary film franchise by creating a larger-than-life destination for audiences to experience attractions that have never been seen before. Fear the roars and the power of the Tyrannosaurus Rex, Velociraptor, and the fearsome Indominus Rex. Based off the concept art, it seems that the resort will be getting the Jurassic World Ride currently located at Universal Studios Hollywood. It is also expected that this park will be receiving a first of its’ kind, Jurassic World dark ride!

Universal Studios Hollywood’s classic extraordinary stunt show “Waterworld” is now coming to Universal Studios Beijing Resort. This offering is one of Universal’s most popular stunt shows ever created. This show also has the highest customer satisfaction of any attraction across the company! This show allows guests to experience a one-of-a-kind “battle on the water”. Beijing will be the only Universal park in the world that will expand this I.P. into a full land including dining and entertainment offerings.

Visitors arriving to the Universal Beijing Resort will be able to live their Hollywood dreams in this themed land. Hollywood will feature a “Lights, Camera, Action!’ attraction from directors, Zhang Yimou and Steven Spielberg. This experience will merge both Western and Eastern popular culture and will take guests into a behind the scenes look of Hollywood special effects.

Universal Beijing Resort will feature two on-site resort hotels. Concepts include: The Universal Studios Grand Hotel and the NUO Resort Hotel. Each of these hotels will offer unique and immersive experiences through stylish design and historic features, bringing new hospitality experiences to life at the resort.

The Universal Studios Grand Hotel- This hotel will offer a contemporary interpretation of the Hollywood Golden Age. This hotel will be designed with classic Spanish architectural influence. The hotel’s 800-rooms will be positioned towards the entrance of the theme park and serve as a beacon of relaxation an escape for its’ guests. It will be themed as a resort style vacation and towards the company’s long running contribution towards the film industry and the Golden Age of Hollywood. The details will completely surround guests in the world of film from all of their favorite movies.

The NUO Resort Hotel-Universal Beijing Resort- This will offer more of a luxurious escape, exemplifying the beauty of China’s ancient royal garden. It will be the first ever resort hotel from NUO, as one of the country’s first homegrown luxury hotel brands. Inspired by traditional and cultural Chinese achievements with a variety of themes such as modern meets simplicity, this hotel will mix business with pleasure and art with technology. Located in the park’s waterway, it will be designed to create the feel of a private retreat. The hotel will hold upwards of approximately 400-rooms and guests will immerse themselves in rich Chinese heritage and modern elegance.

CityWalk at the Universal Beijing Resort will feature vibrant dining and entertainment options that will compliment the theme park experience. Serving up award-winning restaurants, clubs, and a movie theater, this complex will be sure to entertain guests for days.

Universal Beijing Resort is set to open in 2021 as construction is moving at a rapid pace.

Stay tuned for more updates from the Theme Park Shark as we keep our eye on the Universal Beijing Resort!

Some of the soothing spa treatments include a Purify & Refresh Body Treatment and The Wild Honey and Mud Body Renewal.

Menus and Reservation Details Revealed for Space 220 at EPCOT