NBC Sports Grill & Brew is on the way to Universal Studios Hollywood! Opening in 2020, this restaurant will hope to capture the same magic as its’ Orlando sister location. This sports bar Originally opened at CityWalk Orlando back in 2015 and still operates today.

The park describes this new restaurant as “designed to reflect the excellence and excitement of NBC Sports’ award-winning coverage. This will have a fresh take on pub menus and a stellar selection of regional and exclusive draft brews. With a complement of over 100 HD TV screens, broadcasting favorite sporting events, live stream sports content and in-depth sports coverage, NBC Sports Grill & Brew will offer guests the MVP treatment with the best seats in the house.”

Howl at the Moon is located directly above Tony Roma’s. This photo was taken at Universal Studios CityWalk Hollywood.

NBC Sports Grill & Brew is a very large restaurant in Orlando. The Sports Bar features a large screen on the outside and plenty more tv’s on the inside. This is a big restaurant! With both Howl at the Moon and Tony Roma’s closing, you have to wonder if this new Sports Bar will be two stories tall and occupy the current space of both offerings. 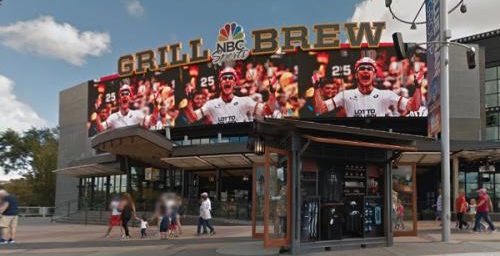 NBC Sports Grill & Brew as seen in Orlando. The front of this restaurant is very big.

We will reach out to Universal to see if we can receive confirmation that the Hollywood version of this restaurant will occupy the entire space. For now, just assume that this new offering will be in the spot currently occupied by Tony Roma’s!

Let us know your thoughts below.

Dustin is the owner of the Theme Park Shark! He has held an annual pass to all major SoCal Theme Parks for the last 10 years and has worked at the parks-- working the main gate at Six Flags Magic Mountain.

Dustin has been following theme parks for over 10 years and specializes in news and updates from Universal Studios Hollywood. Dustin's favorite rides are Harry Potter and the Escape from Gringotts at Universal Studios Florida and The Amazing Adventures of Spider-Man at Island's of Adventure.